Starting from 1995 the Professional Artistic Ensemble „Doina Gorjului” by its new orientation succeeds in a short time to obtain national and international recognition, proved by the prizes and distinctions received abroad Costa Rica, Mexic, Portugalia, Spania, Italia, Franta, Germania, Austria, Israel, Rusia, Republica Moldova, Luxemburg – and in the country to where its succeeds by a permanent search of the true folklore vein to realize great shows being on top of the reevaluation of the authentical folklore. During all this time „Doina Gorjului” Ensemble had a constant presence in the recording studios, offerig to the public four musical albums. 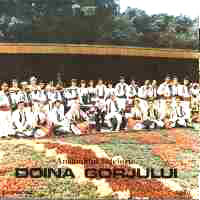 The album is one open window to the folklore of the region Gorj, a county very rich in folklore.

Another album dedicated to the dances is called „Jocuri si dansuri populare cu orchestra Doina Gorjului” , recorded at RBA recording studios. The album contains 17 instrumental songs and dances from all the regions of the country.